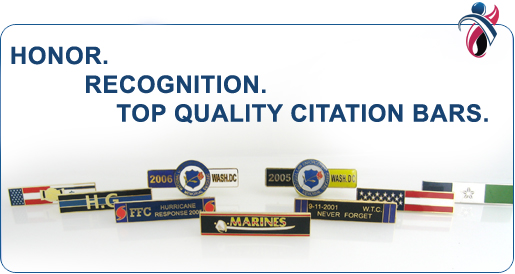 Law Enforcement agencies adopted the concept of police citation bars, albeit on a smaller scale, that made them more manageable for everyday wear. The customary design and placement of citation bars vary greatly from department to department, and no official standardization was ever introduced or formulated. Usually citation bars are worn above the badge to display the medals or as achievements, as the wearing of the actual medals would get in the way of the rigorous day to day work responsibilities.

There are the standard awards that citation bars represent, including years of service and proper firearms use, and some were introduced at later dates, including the WTC citation bar for the heroes of 9/11.

This concept of citation bars and service bars were later adopted by Fire Departments and EMS.  Today you can now see not only the police commendation awards, you also see EMS citation bars and Fire Fighter Citation Bars worn by all emergency service workers.

Citationbars.com is powered by The Pin People - Lapel Pins.